The Mayor of Ożarów Mazowiecki

The Mayor of Ożarów Mazowiecki Paweł Kanclerz receives residents every second and fourth Wednesday of the month from 12.30 to 5.30 pm. 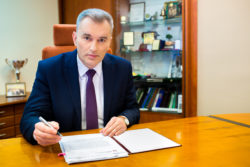 The tasks of the Mayor include in particular:

1) preparation of the Council’s resolutions drafts,
2) establishing the way resolutions are realised,
3) conducting financial economy of the district,
4) executing the budget of the district,
5) giving individual public administration decisions,
6) employing and removing executives of the municipal district units,
7) managing the Crisis Management Body of the district,
8) announcing normative acts,
9) responsibilities associated with the privacy law.

The exclusive privileges of the Mayor include: